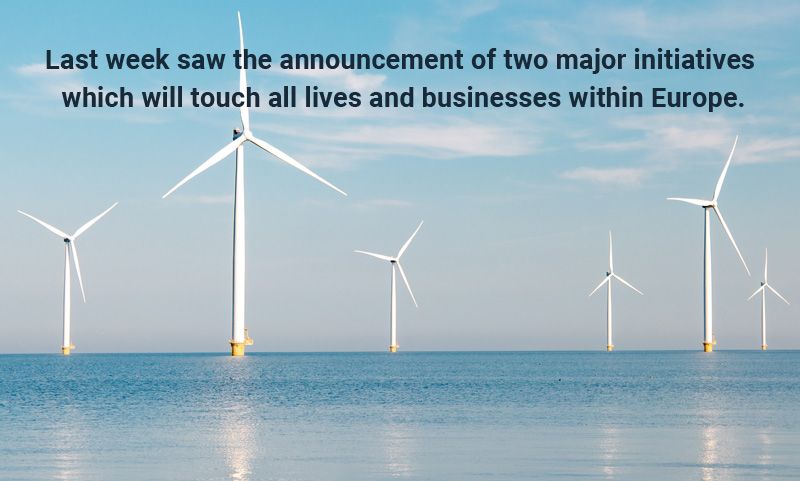 Last week saw the announcement of two major initiatives which will touch all lives and businesses within Europe.

Firstly, the European Union announced its most ambitious climate change proposals to date:

The ‘Fit for 55 package’ (so named, because it would put the bloc on track to meet its 2030 goal of reducing emissions by 55% from 1990 levels), included a number of key proposals:

·         A carbon border tariff, where manufacturers from outside the EU pay more for importing materials like steel and concrete.
·         Plans to expand renewable energy through-out the bloc.
·         Tighter emission limits for cars, which would move toward ending the sale of petrol & diesel vehicle by 2035.

But, it’s the proposal to introduce a tax on aviation fuel, and a 10-year tax holiday for low-carbon alternatives which will likely draw the most attention of the travel industry.

EU climate policy chief Frans Timmermans, said we’re asking a lot of our citizens and industries “but we do it for good cause. We do it to give humanity a fighting chance.”

The proposal will likely spark fierce debate and years of negotiations amongst the EU member states.

Secondly, the UK government published its ‘greenprint’ to decarbonise all modes of domestic transport by 2050:

The ambitious plan aims to create cleaner air and tens of thousands of new jobs by:

“To ensure the UK meets its climate targets, the government will need to convert its raft of new proposals into measures that rapidly change how people and goods move. More difficult decisions to reduce vehicle use and flying and reallocate spending towards green transport options will be needed, but this plan signifies a commendable and substantial shift in the right direction.”

Businesses and individuals should prepare for the regulations which will be needed to deliver these initiatives.

We are driven by our passion for travel and a deep appreciation of the benefits it can bring to people and places around the globe.

Our mission is to ensure that the industry we love thrives, whilst minimising the impact on the natural resources on which we all depend.

We are ready to support you on your sustainability journey.

Patrick’s 35-year career spans leadership and transformational roles across the travel sector. This includes a 20-year stint on the executive committee of GTA, the pioneer in the hotel bedbank and groups segments, sold to Cendant for $1.1 billion in 2005. Post ’05, the company owners included Blackstone’s Travelport and Kuoni. As a core member of the management team, Richards drove change and revived growth. Joining Cox and Kings in 2013, as Chief Commercial Officer, he modernised the commercial face and globalised the group, additionally being appointed President of the business’ arm in the Americas and Ezeego1 Board Director (the on-line sister brand).

Between 2007-2014, Richards chaired the European Tourism Association (ETOA). Remaining as a director (from 2015 to 2021); he took on board-level responsibility for the association’s drive on positive climate action. It quickly became apparent to him that a real gap existed between travel & tourism’s sustainability rhetoric and real adoption across the commercial sector. This led to the creation of TerraVerde. Today, additional board roles are held in trade association the Nordic Tourism Collective, and an innovative tourism e-learning start-up LVG Learning.